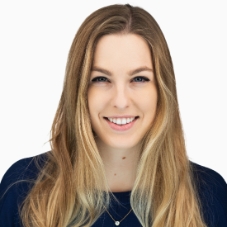 Madeline Malinovsky plays one of the most important roles at JVM, as the manager of JVM’s entire International Team. JVM’s highly qualified and uniquely talented virtual team members work primarily out of Jamaica and the Philippines and assist JVM’s domestic team with every aspect of company operations. This in turn significantly improves efficiencies, which allows JVM to offer far better service and much lower rates. Madeline is in charge of recruiting, hiring, training and managing all of JVM’s international team members – currently over 40 people.

Madeline is highly qualified for this role, having worked extensively in all areas of JVM Lending, including as a Mortgage Analyst, a Closing Specialist, and a State-Side Team Trainer. She is also a prominent member of JVM’s Tech Committee.

Madeline graduated Cum Laude from Boston College, where she earned a Bachelor of Arts in Political Science with a minor in Economics. During her time at Boston College, Madeline played the sousaphone in the Screaming Eagles Marching Band where she quickly rose to become an Executive Board Member – the highest student leadership position in the band. As an Executive Board Member, Madeline coordinated rehearsals, arranged gameday activities, organized international and domestic travel itineraries for the 180 band members, and served as the primary liaison among band members, student leaders, band staff, and the director. While in college, Madeline’s creative brain also led her to work as a decorator at a local bakery. Madeline grew up on the coastal shoreline of Connecticut, where she came to love saltwater and the outdoors. In her free time, you will find Madeline longboarding with friends, enjoying the outdoors, or taking her kittens, Marmalade and Coffee, on a walk.