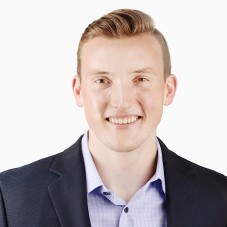 Ted Lomond is a member of JVM’s renowned Mortgage Analyst Team. As a graduate of JVM’s extraordinarily rigorous training program, Ted understands every aspect of mortgage financing and employs that knowledge to educate, advise, and pre-approve clients. Ted graduated from Gonzaga University, where he earned his Bachelor’s degree in Business Administration, with a concentration in Finance and Entrepreneurship. In addition to managing a rigorous course load, Ted also competed on Gonzaga University Men’s Rowing Team in both the fall and spring racing seasons while training year-round. Off the water, Ted also competed twice in the semi-finals of the Northwest Entrepreneurship Competition through Gonzaga’s Entrepreneurship and Innovation Program. Ted’s drive, organization skills, and hardworking disposition make him an invaluable addition to JVM’s Mortgage Analyst Team.

Ted grew up in Lafayette, California, where he spent most of his time running, hiking, and enjoying the East Bay’s many gorgeous parks, open spaces and land reserves. In his free time, you can often find Ted learning new board games, trying out new recipes in the kitchen, and frequently taking walks with his two dogs – Labrador Retriever, Sam, and Pug, Biggie.