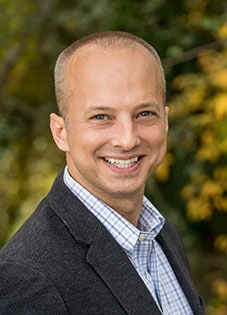 Josh Hiller provides operational expertise and a customer-centered focus as a Senior Client Advisor & Mortgage Analyst for JVM’s first Texas branch in Austin.  Josh has been originating loans since 2008, acting as the primary point of contact for new applications and loans in process.  Josh grew up in the mortgage industry as the son of a former President of the Texas Association of Mortgage Brokers, and in his career has worn most of the hats involved in retail lending.

A  2004 graduate of The University of Texas in Austin, Josh served in the U.S. Marine Corps, deploying to Iraq during Operation Iraqi Freedom with the 4th Reconnaissance Battalion in 2006.  Josh currently resides in Austin with his incredible wife, Bita, and their two young children, James and Olivia. Prior to fatherhood, Josh was an active supporter of Young Texans Against Cancer, for which he created an event that raised over $150,000 for central Texas cancer charities, and he’s a finisher of the “World’s Toughest Boat Race”, the 262-mile Texas Water Safari.